Riomaggiore is the first village of the Cinque Terre starting from the east and is the seat of the local administration.

It rises along the valley of the Rio Maggiore torrent, the ancient Rivus Major from which it takes its name, but like the other villages of the Riviera its origins lie upstream, among the small settlements of the middle coast: Casen, Cacinagora, Saricò and Lemen. They decided to merge at the mouth of the “rio” giving life to the seaside village of Riomaggiore in 1251.

The history of Riomaggiore

The origins of the village are not certain, as often happens for small agglomerations built before the year 1000, but an oral legend says that the first inhabitants, who settled near the current shrine of the Madonna di Montenero, were Greek refugees fleeing by Leo III Isauricus.

Thanks to the taking of power of the Republic of Genoa and its expansion along the coast, the inhabitants were able to move downstream with greater security, constituting the first nucleus on the sea, the current Marina di Riomaggiore. In 1251, year of the first documents mentioning the village, Riomaggiore swore allegiance to the Republic as a fief of the Lords of Ripalta, to then pass under the dominion of the Fieschi and be definitively sold to Genoa in 1276.

Under the dominion of the Republic, Cinque Terre could start a real economic and commercial development process, which gave rise to the terraces that you can still admire today and which allowed the development of agriculture now known as heroic.

The modern history of Riomaggiore coincides with that of the other four villages: under French rule from the end of 1797 the village was annexed to the Department of the Gulf of Venus, initially with capital La Spezia, then Vernazza, to later be included in the Department of the Apennines with the First Empire of France. From 1815 it became part of the Kingdom of Sardinia, until the creation of the Kingdom of Italy in 1861.

A curiosity about Cinque Terre: until 1871 Corniglia was also a hamlet of Riomaggiore, together with Manarola.

According to the architectural scheme of the possessions of Genoa, the inhabited center was built descending along the stream course, on parallel orders of tower houses that had both military and housing functions, with double access on different levels, one official toward the sea and one upstream, to facilitate escape in case of a sudden attack from the sea.

With the same purpose, a large maze of narrow alleys was traced, the so-called carruggi, following Genoa’s urban scheme.

Instead, it is said that the colors of the houses have become a tradition to allow sailors to identify their homes from a distance when getting back to the harbor. We certainly know that the pastel tones are those of the Provencal tradition, extended to the entire Riviera of the ancient Department of the Apennines and that the plaster was used to mask the medieval wrecks and the wealthier families began to ask for painted new moldings and architectural ornaments, giving life to the typical modern Ligurian architecture.

What to see in Riomaggiore

The parish church of San Giovanni Battista, with a basilica plan and three naves separated by pointed arches, was built by Antelami‘s workers in the upper part of the village and was founded on 8 November 1340 with license from the Bishop of Luni. Like all the churches in our area, it underwent various modernizations and reconstructions, such as those of 1870 which affected the neo-Gothic facade without altering the fourteenth-century rose window.

Inside you can admire the marble reliefs of 1530, the XVII century pulpit, the triptych with the Madonna and Child and Saints Rocco, and Sebastiano previously located on the altar of the homonymous oratory, the XVII century wooden crucifix by the Genoese Anton Maria Maragliano and the Agati organ of 1851.

The oratory of Saints Rocco and Sebastiano, consisting of a single nave covered by a barrel vault and preceded by a small portico, was built in 1480 to thank for the end of the plague that hit Riomaggiore. The architrave decoration pays homage to both saints.

The construction of the Castle of Riomaggiore began in 1260 at the behest of the lords of Ripalta and was completed in the late XV century, under the Republic of Genoa.

It is a small quadrangular fortress, built in a dominant position – and decidedly a panoramic one! – equipped with walls made up of two circular towers. Over time it was also a local cemetery and today it is the conference room and cultural center of the municipality. 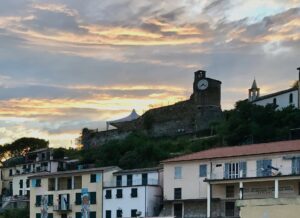