A trip to Portofino from the Cinque Terre is not only very feasible, but we recommend it!

If you follow us on social media, you will know that we often repeat to visit calmly and dedicate the right time to villages, trails, and experiences, perhaps extending the stay a little to experience something that goes beyond the glossy postcards of the Cinque Terre.

In reality, however, a very valid reason to extend your holiday in the Cinque Terre is that from here you can easily visit our wonderful surroundings: from the Gulf of Poets to Tigullio, from the hinterland with historic villages and food and wine products to unique cities such as Genoa and Pisa and then Lucca and Pietrasanta with sculptors and marble quarries to discover. In short, there is something for all tastes.

A trip to Portofino

Portofino, included within the Regional Natural Park of Portofino, is a typical Ligurian coastal village, once inhabited mainly by fishermen, whose boats were protected by the shape of the small bay – within the Gulf of Tigullio – surrounded by colorful tower houses arranged in a semicircle around the famous Piazzetta.

To reach it from the Cinque Terre, you have several options:

As you already know, Portofino is today a favorite destination of the international jet set, chosen by many VIPs for their summer stays, in the splendid villas that dot the bay or aboard the sumptuous boats that have now almost completely supplanted local fishing boats.

Over a stroll between the Piazzetta and the pier, a glass of wine by the water, and maybe some crazy shopping in the famous fashion boutiques, we recommend a walk to the lighthouse and then to the Second World War bunker, and then a visit to the following monuments downtown:

From here, if you plan well, you can also visit the Abbey of San Fruttuoso, hiking along a splendid and ancient path, or by boat. However, we will talk about San Fruttuoso in another post because it really deserves a trip to itself and another day, perhaps even including a visit to lovely Camogli. 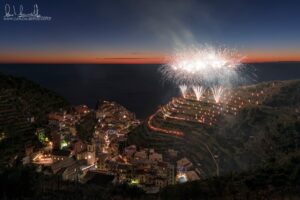